The Insight Toolkit (ITK) is an open-source software toolkit for performing registration and segmentation.

ITK is implemented in C++. It is cross-platform, using a build environment known as CMake to manage the compilation process in a platform-independent way. In addition, an automated wrapping process (Cable) generates interfaces between C++ and interpreted programming languages such as Tcl, Java, and Python. This enables developers to create software using a variety of programming languages. ITK’s C++ implementation style is referred to as generic programming, which is to say that it uses templates so that the same code can be applied generically to any class or type that happens to support the operations used. Such C++ templating means that the code is highly efficient, and that many software problems are discovered at compile-time, rather than at run-time during program execution.

ITK can be downloaded without cost from the following web site:
http://www.itk.org/HTML/Download.php

The challenge of supporting ITK across platforms has been solved through the use of CMake,
a cross-platform, open-source build system.

ITK requires at least CMake version 2.0. CMake can be downloaded at no cost from
http://www.cmake.org 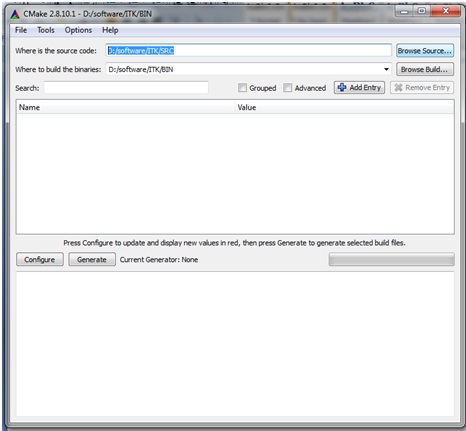 1.       Make an ITK folder where ITK will be installed and build
2.       Make two subdirectories inside ITK folder named src and bin
3.       Extract all files of downloaded ITK zip file into src
4.       Open Cmake gui
5.       Enter path of src into  Where is the source code
6.       Enter path of bin into Where to build binaries
7.       Now click on Configure
8.    Select compiler for example if you are building for 64 bit choose 64 bit compiler.
9.    Select configuration options according to your need and configure again till red selection disappeared.
10.  Then click on Generate
11.     Now close Cmake and go in bin of ITK find ITK.sln file and click on it, it will open Visual Studio
12.     In solution explorer  select ALL_BUILD and build it [build will take around 90 minutes]

Go to \ITK\SRC\Examples\Installation folder and copy both files CMakeLists.txt and HelloWorld.cpp
Make a test folder with src and bin subfolders
Paste both files into src
Open Cmake and give path of src in source code and of bin in binary and configure then generate
Open bin of test folder and click on HelloWorld.sln it will open Visual Studio
Now build if error then ITK install is not ok.
After build open bin folder of test and check debug folder if there is an exe of HelloWorld exist if it is then ITK installed and build is ok.

Email ThisBlogThis!Share to TwitterShare to FacebookShare to Pinterest
Labels: ITK